放大 缩小
If the reports are true, it means BYD's technology competence in the EV sector has reached a new level, Yu Qingjiao, secretary general of the Zhongguancun New Battery Technology Innovation Alliance, told the Global Times on Wednesday. 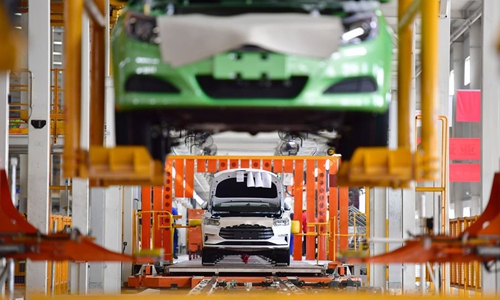 BYD did not respond to the Global Times' inquiry as of press time.

If the reports are true, it means BYD's technology competence in the EV sector has reached a new level, Yu Qingjiao, secretary general of the Zhongguancun New Battery Technology Innovation Alliance, told the Global Times on Wednesday.

"Compared with other EV makers that rely on imports or the joint development of automotive chipsets, BYD attaches more importance to self-development, and its technological foundation in electronic goods can help it in the auto sector," said Yu.

In 2018, BYD unveiled its car-level insulated gate bipolar transistor (IGBT) 4.0 technology, claiming that it is the only Chinese automaker that can realize mass production of car-level IGBT chipsets with a complete industry chain.

German semiconductor company Infineon is far ahead of others, commanding 49.2 percent in the EV IGBT market, followed by BYD with 20 percent.

"It will be a surprise to me if BYD can supply IGBT chips for Daimler," said Mei Songlin, a senior auto industry analyst. Apart from batteries, the teaming-up indicates that the companies want to expand their strategic cooperation in the EV sector.

"It proves that Chinese automakers, based on investment in R&D, could win the recognition of global players," Mei told the Global Times on Wednesday.

It was reported earlier this month that BYD will supply its latest blade batteries to Daimler. The two already have a joint venture in China for a luxury, niche EV brand known as Denza.

China has long depended on imported IGBT chips and modules, accounting for 90 percent of the market, according to media reports.

Jointly supported by the Ministry of Science and Technology and the Ministry of Industry and Information Technology, the China Automotive Chip Industry Innovation Strategic Alliance was officially established in Beijing over the weekend, aiming to realize independent, safe, controllable and rapid development of China's auto chip industry and help the country become a global auto chip innovation and industrial leader.

EV players aim to seize a share in each vertical segment in the EV sector, from batteries to chipsets, according to Mei.

In China, BYD is one of the few automakers that is on track to self-reliance, he said.

US auto giant Tesla has signaled that it will reduce reliance on its supply chain and focus on in-house development, including batteries and automotive chips.

At the Tuesday Battery Day event, Tesla announced that it plans to manufacture its own "tabless" batteries, which will improve its vehicles' range and power.